Average Teacher Salary Is Below the Living Wage in Half the Country, Report Says 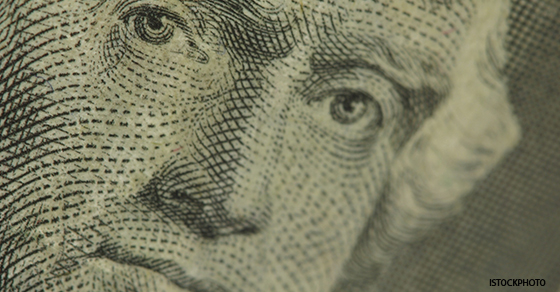 In more than half the states, the average teacher is not making a living wage, a new report says.

In this report, researchers at the nonprofit Education Resource Strategies make the case for a redesign of education spending and teacher compensation. Too often, researchers charge, states are not providing enough resources to schools—but even when they are, districts are not always allocating the resources in a way that best serves the teaching profession.

This report comes at the tail end of a spring of teacher protests, demonstrations, and strikes that were largely centered around low wages. According to data from the National Education Association, the 2016-17 average public school teacher salary was $59,660, but that amount varied widely between states. While teachers in New York make an average of $81,902, teachers in Mississippi make $42,925 on average—the lowest in the country.

ERS researchers calculated the gap between a living wage and the average teacher salary in each state. [Note, 6/19/2018: This calculation has been corrected and updated since the report's initial release.] The researchers used the Massachusetts Institute of Technology living wage metric, which calculates each state's living wage as the minimum income needed to cover basic needs and all relevant taxes for a single earner with up to three children.

(Previously, the ERS data calculated the living wage gap for a family of two adults and one child. That metric assumed that both adults contribute equally to meet the family's needs. However, the previous calculations did not account for the salary of the second earner in the household, making the old analysis inaccurate.) The updated calculations using the new metric show that in 30 states, the average teacher salary is below the living wage, and the gap is wider than previously reported. 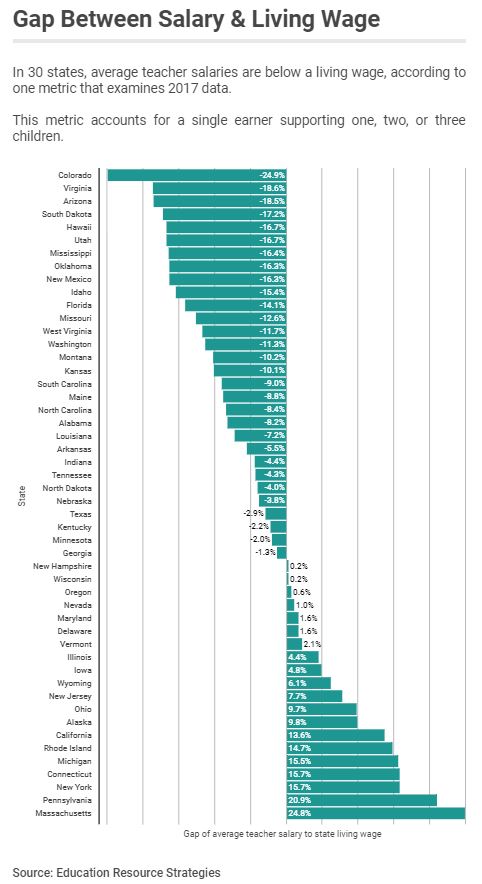 MIT researcher Amy Glasmeier said in a statement provided by ERS that the value of the living wage represents a "thrifty budget."

"It doesn't account for savings, emergency funds for something like a car breakdown, or the cost of student loans," she said.

"This is a big deal," added Karen Hawley Miles, the president and executive director of ERS. "When we're to the point of teachers qualifying for public assistance, ... this is a big equity issue."

States with low teacher salaries, Hawley Miles said, tend to have more teacher shortages, a higher teacher turnover rate, and more uncertified and novice teachers than those states that pay the most. Those are all factors that hurt students, especially those who need good teaching the most, Hawley Miles said.

"Teacher compensation should be more strategic—making sure that teachers can get to a living wage earlier or get to a professional wage," she said. "You really don't start making enough money to buy a house or support a family until you're 10 or 12 years in, while in another comparable profession, you can do that much sooner."

Of course, teachers also collect pension benefits upon retirement, which can be quite generous, depending on when a teacher retires. But the ERS report suggests that states and districts should "frontload" teacher compensation instead, by shifting teacher retirement benefits to defined-contribution plans, such as 401(k) accounts common in the private sector.

"If we were able to shift the dollars to the front, we might get to keep teachers during those really key years, years four to eight, when teachers are figuring out what to do, and they have a ton of energy, and they want to make a difference," Hawley Miles said. "That's when we're losing them."

Research has indicated that many teachers leave the profession before they are eligible to collect the full amount of their pension. Still, legislative attempts to change teacher pension plans have been controversial.

The ERS report also recommends that districts invest education funding into teacher salaries, instead of adding more staff members. Between 1969-70 and 2014-15, staffing levels grew at a faster rate than student enrollment—and many of those hires were for non-teaching positions, like paraprofessionals.

"We can go in almost everywhere and find places where you might want to trade in staff for raising teacher compensation," Hawley Miles said. For example, she added, schools could use technology to handle tasks that are currently done by clerical workers.

Hawley Miles said she hopes the report will launch conversations among state policymakers and district leaders on how to better use education funding.

"It's a huge rallying cry, but it's also a huge opportunity to think differently about teacher compensation. The danger is that the dollars just get flowed into the old ways of doing things," Hawley Miles said.

Still, she added, in many places, the first step should be allocating more money to education: "When you can't figure out a way to pay teachers a living wage, I guess you can say the funding level isn't high enough."

In Low Teacher Salaries 101, ERS takes a state-by-state look at education spending levels, teacher salaries, and how salary levels correlate with turnover, staffing shortages, and other issues. We then offer recommendations for how to compensate and support teachers strategically.

Editor's Note, 6/19/2018: After the release of this paper on June 14, ERS researchers found inaccuracies in their calculations of the living wage gap for teachers.

They reworked the data, using a modified methodology and more recent living wage numbers, and released a corrected report today. The below post reflects the updated calculations.