My children, ages 8 and 5, attend a public bilingual immersion school called Amigos in Cambridge, Massachusetts. Because of the special English-Spanish program, the two of them have had a total of six lead teachers in four years. Unfortunately for us, four of those teachers are moving on this year.

Recently, I asked the principal about the school’s progress at hiring new teachers for 2014-15. Her eyes widened. “We’re working hard, but it’s really tough right now,” she said. “I don’t know if you know, but Boston has moved really fast to hire new teachers this year. There just aren’t as many qualified people available as we’ve seen before.”

It turns out Boston has moved fast—historically fast. Under the leadership of Interim Superintendent John McDonough and Assistant Superintendent for Human Capital Ross Wilson, BPS has empowered all school leaders to, in McDonough’s words, “take a complete look at the applicant pool for their vacancies and make an informed choice about which teacher would be the best fit.” Some BPS schools enjoyed this hiring autonomy already, but for 2014-15, all school leaders had the ability to post open roles as early as March—rather than waiting until June or July, as so often happened in the past. 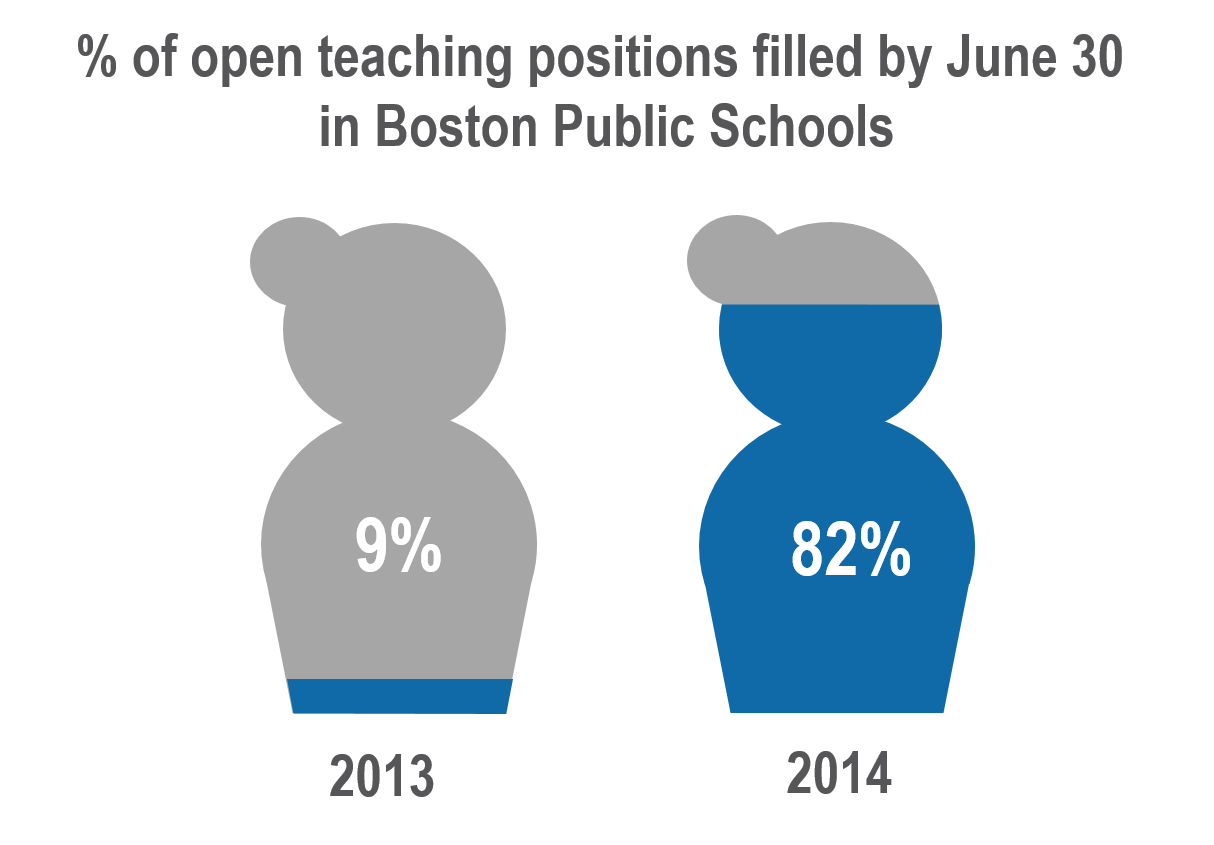 What’s more, while some feared that early hiring would hurt the district’s efforts to diversify its teaching force, teacher diversity has actually increased this year. According to BPS, the percentage of newly hired teachers who identify as African-American is up six points (from 15% to 21%) and for those who identify as Latino or Hispanic, it’s up two points (from 12% to 14%).

In addition, contrary to many expectations, the size of BPS’ “excess pool”—the group of teachers who do not have full-time placements—has decreased. According to McDonough, “Half of school-based teachers in the ‘excess pool’ who have applied for positions have received an offer, ensuring they will continue teaching in BPS at a school that’s a good fit for them.” In past years, teachers in the excess pool were automatically placed into full-time roles for which they may or may not have been the ideal candidate. This year, working from projections developed by ERS, the district is assigning the remaining unplaced teachers to other supporting roles while conducting full evaluations of these professionals. Philanthropic support is enabling BPS to fund these additional support positions.

Finally, BPS can keep more promising candidates who already have experience in Boston. More than a third of total offers as of June 30—nearly 300 teachers—were made to “provisional educators who our school leaders believe have earned a place in our classrooms [and] who we may have lost in previous years simply because we couldn’t make them an offer quickly enough.”

Looking ahead, there is still work to do. For example, leaders at the one-third of BPS schools that already had the ability to hire early, were required to abide by new processes and procedures that, in many cases, made hiring their desired candidates more difficult. Incorporating feedback from these leaders will be crucial to BPS’ ability to improve the system next year.

The impact on surrounding districts is also becoming clear, as leaders of schools like my kids’ continue their search for qualified teaching talent deep into the summer. I’m incredibly proud of our colleagues in Boston for the progress they have made this year. My hope is that districts across the Boston area, including Cambridge, will empower school leaders and their teams to compete early and hard for the teachers who offer the best opportunity for their students to learn and grow.