Does teacher pay fall short of the living wage in 30 states, as Kamala Harris said?

See the original article, as posted in Politifact California.

Sen. Kamala Harris, D-Calif., has attracted attention with a proposal to boost average teacher pay by $13,500 if she’s elected president.

To promote that policy, Harris sent a tweet that said, "In 30 states, average teacher pay is less than the living wage for a family of four. The teacher pay gap is a national crisis. Sign your name next to mine if you agree." 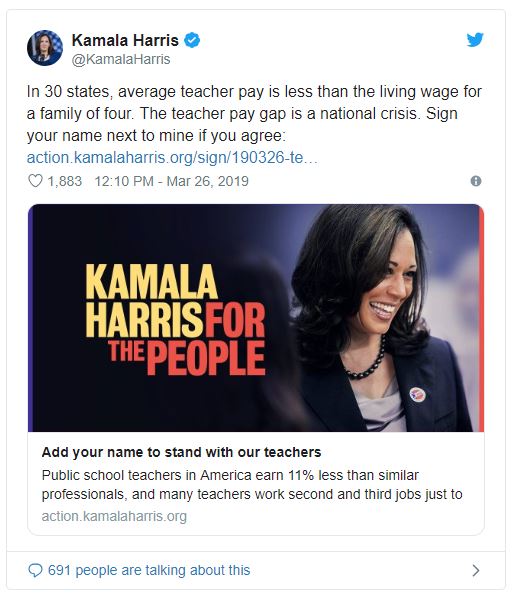 Is it really true that "in 30 states, average teacher pay is less than the living wage for a family of four"? Studies have argued that teacher pay has been stagnating in recent years, but it’s worth noting the particular framing Harris used.

The Harris campaign pointed us to a study published in 2018 by the education consulting group ERS that compared average teacher salaries to a living wage, concluding that in more than half of states, average teacher salaries are below a family living wage for that state. A "living wage" refers to a calculation pioneered by the Massachusetts Institute of Technology that determines, based on geographic location, how much income is needed to meet a basic level of existence. It includes costs like food, housing, child care and health care. (Some federal poverty measures do not include all of these criteria.)

The summary can be seen in this chart from the report. 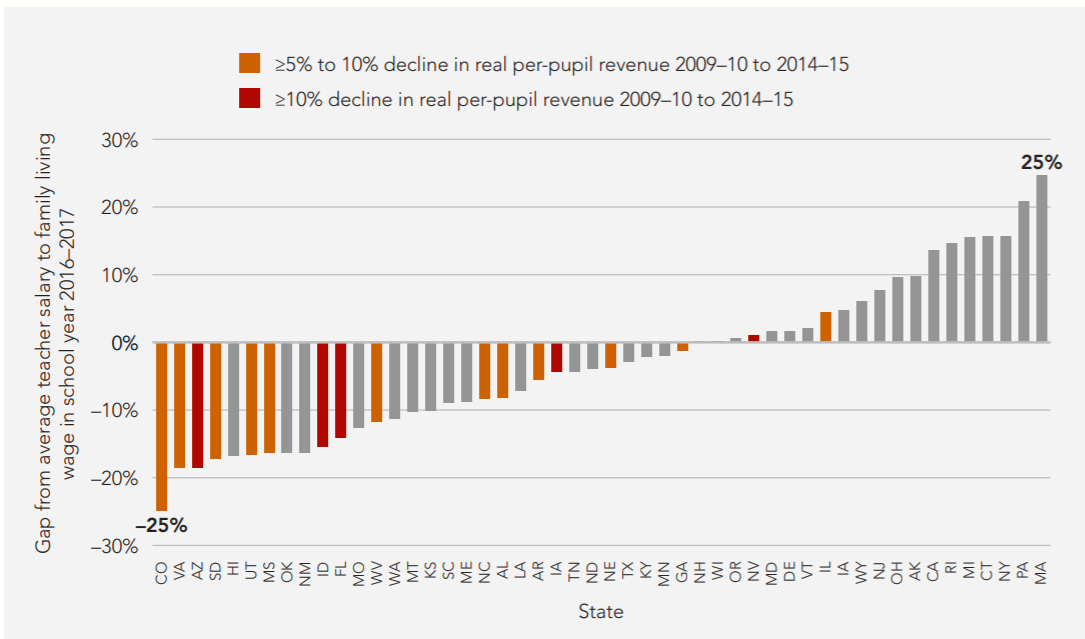 Some caveats on the data

First, the analysis doesn’t include benefits, which for unionized teachers can be more favorable than benefit packages in other types of jobs.

Second, the data addresses pay earned during nine- or 10-month contracts that are typical for school systems; it does not include additional income the teacher may be able to earn during the summer. Yet this nine- or 10-month income is being compared to a living wage calculation based on a 12-month year.

If a teacher works during the summer, their salary total would be higher, possibly rising above the living wage. The amount would vary by state. "In Georgia, the average teacher would need to make only $735 over the summer, but in Colorado it would be over $12,000," said ERS spokeswoman Karen Silverman.

And third, ERS’ data does not account for a spouse’s income, nor does it  incorporate an analysis of teachers who are single and have no children. Both these factors could determine the amount of a teacher’s applicable living-wage standard.

How much should these caveats matter in evaluating Harris’ tweet?

Jesse Rothstein, director of the Institute for Research on Labor and Employment at the University of California-Berkeley, said concerns that the data doesn’t account for these circumstances are legitimate but amount to nitpicking.

On the question of summer income, for instance, "there is a long debate on this question," he said. "Teachers in practice do quite a bit of work over the summer to prepare for school and in part because teachers are rarely able to find highly-paid summer jobs."

Tara Sinclair, an economist at George Washington University, said it’s important not to ignore the gender context when discussing a field that is overwhelmingly female.

"It's an unfair gender bias that potential income from spouses comes up immediately in discussions of teacher pay when it might not come up in discussions of the pay of other occupations — imagine police officers or firefighters for example," Sinclair said. "This comparison is about what teachers are paid, not what households with teachers in them earn."

Sinclair also said that considering the size of families can also be problematic. "It seems like a slippery slope when talking about pay since it's illegal to ask about marital status or children in hiring, so that seems inappropriate to consider for pay as well," she said.

Sinclair said she would prefer to see public officials compare teachers’ salaries to the average salaries of the college-educated. Still, she said, there is value in what Harris said, because it supports the idea that "teaching is a profession that should be valued more in society than it currently is."

Harris said, "In 30 states, average teacher pay is less than the living wage for a family of four."

Since a living wage is in part calculated based on a person’s household and family circumstances, the comparison Harris used excludes such factors as non-salary benefits, summer income, working spouses, and smaller family sizes. Harris's premise is that teacher pay alone should support a family of four. In the context she specifies, her statement is accurate.

We rate the statement Mostly True.