A former state governor, some Los Angeles-area business leaders, and a variety of parents, educators and community members gathered at a Beverly Hills, California, home recently to cut 4% from a school’s budget.

They could trim classroom aide positions, but not if it’s past the deadline to lay off personnel, an educator in the group noted. They could bring in volunteer tutors, but a parent questioned whether those individuals would have the proper training and be dependable. Or, they could cut equipment and materials, but another participant reminded everyone that some funds are restricted.

“You want to keep the cuts away from the classroom as much as possible,” a school board member said.

The budget challenge, however, wasn’t a real one — it was part of a game developed by researchers at the RAND Corporation to help those who focus on such issues in reality in considering multiple perspectives when making decisions.

“Let’s Improve Tanner High School,” which includes a range of funding, achievement and school culture-related challenges, has been played in Washington, Pittsburgh and now Los Angeles, and the researchers would eventually like to make it widely available. The principal of the fictional Tanner High has gone on leave, an assistant administrator is serving as acting principal, and the participants’ charge is to provide advice on key policy issues. The group that makes recommendations considered by the others to be the most promising is declared the winner. 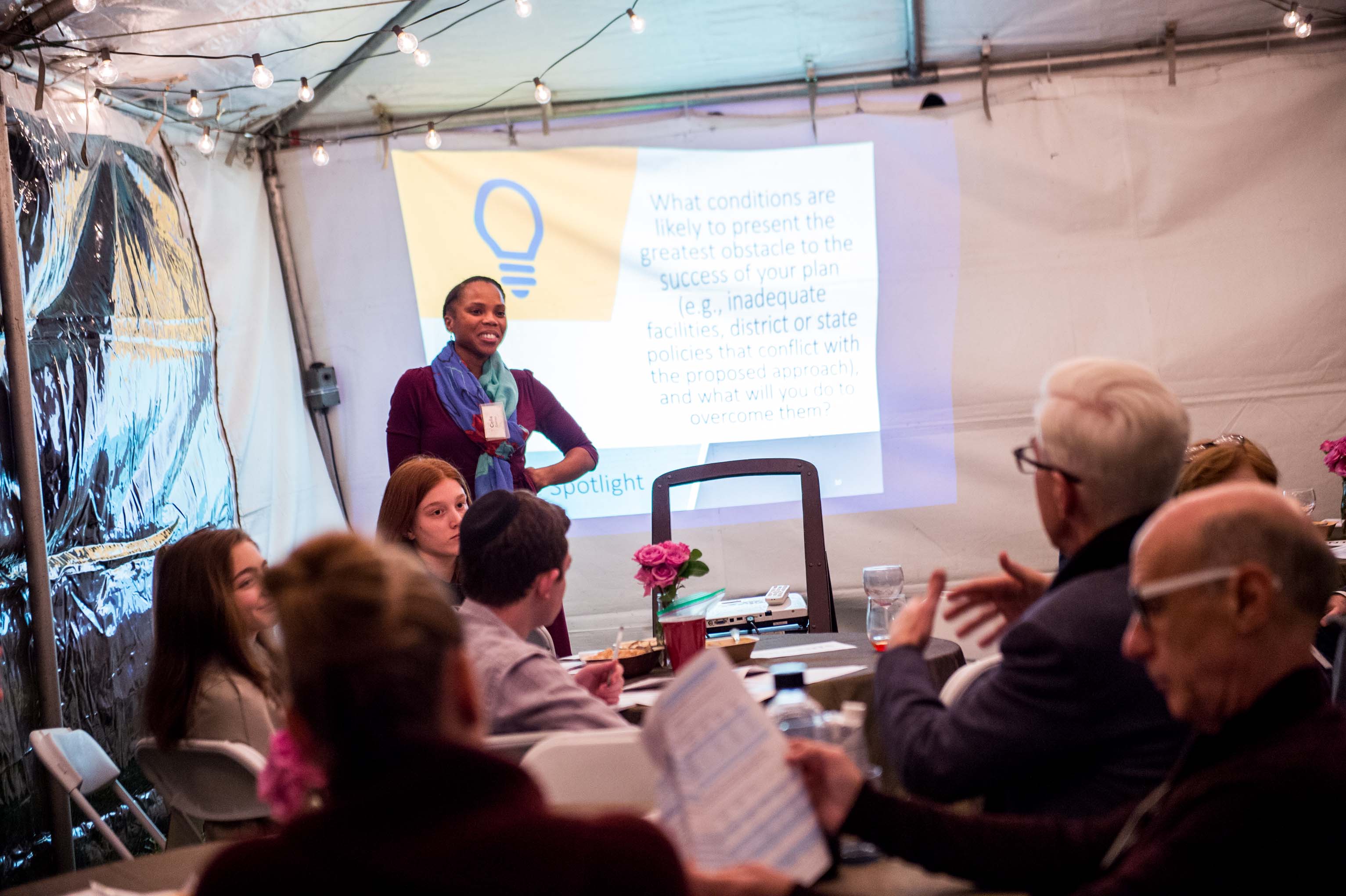 While educators use a variety of games in the classroom for learning, similar game-based approaches are increasingly finding places outside of the classroom among adults who are responsible for and concerned about education. The question is whether participating in such a mock brainstorming session can help guide school leaders and district officials when the pressure is really on.

“We do know from other RAND games that it does change their decision making,” Darleen Opfer, vice president and director of RAND Education and Labor, said in an interview.

That’s what Education Resource Strategies (ERS), a Watertown, Massachusetts-based nonprofit, has also found with its Budget Hold 'Em game, which more than 10,000 educators, district staff members and community members have played since 2011.

In the game, players also have a case study on a fictional school and draw cards filled with a variety of budgeting scenarios. Ultimately, as they play their “hand,” participants have to make tradeoffs between expenses and savings in order to meet their goals. One version of the game focuses on school-level budgeting decisions, and another is designed for those who make those decisions at the district level. While ERS facilitators have held in-person games with school and district teams, there is also an online version of each game.

Players often have “aha” moments as they work through the challenges, Renée Sullivan, a senior communications specialist with ERS, wrote in an email.

“It’s important to think through not just the investment decision itself, but what else needs to be in place for that investment to be used effectively,” Sullivan wrote. “If you are choosing to invest in additional time for collaborative planning, it’s important to also consider how that time will be used well and if an investment in expert support for that time is also needed.”

As with the RAND game, Budget Hold 'Em is most effective when representatives from different groups participate, Sullivan said.

“Some districts use Hold’em as a tool to educate stakeholders about difficult decisions the district is considering,” she wrote, “while others customize the game with their own district’s information so they can use it to explicitly ask stakeholders to help make tradeoff decisions that will then be reflected in the budget.”

‘What levers are most important’

That’s what the Syracuse City School District in New York did by limiting the cards to the topics on which they most needed feedback, Suzanne Slack, the district's chief financial officer, said in an email. Working in small groups, principals, vice-principals, parents, students and other district leaders were asked to sort the options into "Yes," "No" and "Maybe" piles as they narrowed down their choices.

The game, she said, has definitely influenced officials’ — and the public’s — thinking when budgets are actually being finalized. For example, school leaders and members of the community long advocated for providing transportation for all students, regardless of how close they live to school. But during the game, no group was willing to make cuts in other areas to pay for those transportation costs.

“This really changed the public pressure and allowed us to offer to transport some more, but not all, kids,” Slack said. “It helped us understand what levers are most important to the various groups.”

In another example, she said, teachers tend to push for adding more technology to the classroom, “but kids said to stop — it’s too much tech and not enough dialogue and interaction,” she said. “We do use the results in our final determinations.”

In the fall of 2017, about 30 administrators from the Shelby County Schools in Tennessee also used Budget Hold 'Em as a way to prepare for the district’s new school-based budgeting policy. They were faced with decisions such as whether to implement block scheduling in math and English language arts to improve performance among struggling students, but then decided against it because the school’s faculty was relatively young and inexperienced. 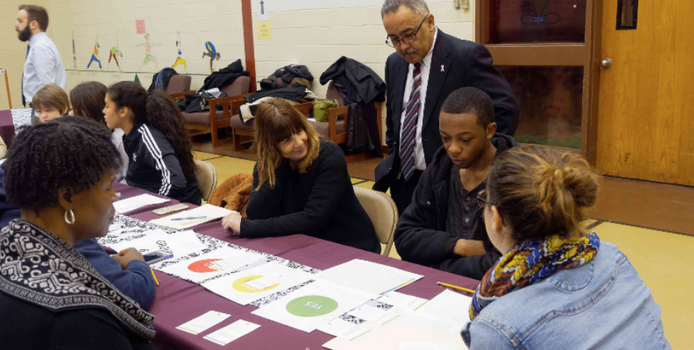 A game format “breaks down silos” between those from different departments or between educators and other groups in the community, Sullivan said. Some district officials have even been known to play the game with union leaders as a way to “break the ice,” Melissa Galvez, a senior editor with ERS, said in an interview.

“Typically, the budgeting process is seen as being dry and ‘for finance,’ but it’s such a critical piece to ensuring that the district’s limited resources — people, time and money — are used well,” Sullivan said. “I think you’ll find most people would take cards over a spreadsheet any day.”

While Hold 'Em is ERS’s signature game, a few years ago, the organization also introduced a game focusing on teacher compensation, titled “What Price is Right?” With options such as whether to give bonuses to teachers for boosting student test scores or rewarding educators for taking on leadership positions, the game was another way to help leaders consider how their decisions might affect different groups. The exercise is now part of a workshop package available on the ERS website.

WestEd, a San Francisco-based research and professional development organization, also uses a game format to help district and school leaders think through important decisions — this time about professional development. In Leading Professional Learning, players are given detailed profiles of individual educators describing their backgrounds, levels of experience and approaches to teaching. They are then tasked with choosing which teachers to add to a team that will focus on implementing new science lessons.

In a WestEd article, those who have played the game say the format helped them remember the content of the session much more than a typical leadership workshop, and that the “risk-free environment” allowed them to think creatively.

‘To see where we connect’

When the RAND game was played in Pittsburgh, participants made an interesting proposal related to school sports, Opfer said. They suggested cutting all athletics because parents and community members would make up the cuts with donations. 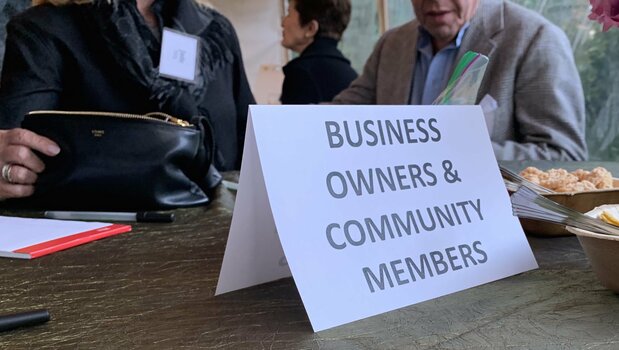 As the educators and community members gathered in Beverly Hills to tackle issues at Tanner High, a conversation at the elected officials table focused on whether to cut the one position responsible for overseeing students’ work experience, such as internships. Former California Gov. Gray Davis — who said he visited a school at least once a week while he was in office — argued such a position was too valuable to lose because curriculum is often “two to three years behind” what is happening in most career fields.

“I think the most important thing a school can do is give [students] a sense of what the future holds,” he said.

Noah Margo, school board president for the Beverly Hills Unified School District, said when he makes choices about school staff positions, he’s usually working “with real money.” The game, however, was useful, he said. “What I’m getting out of this the most is other people’s thoughts — to see where we connect on things.”