How States Can Improve Their Lowest-Performing Schools Under ESSA 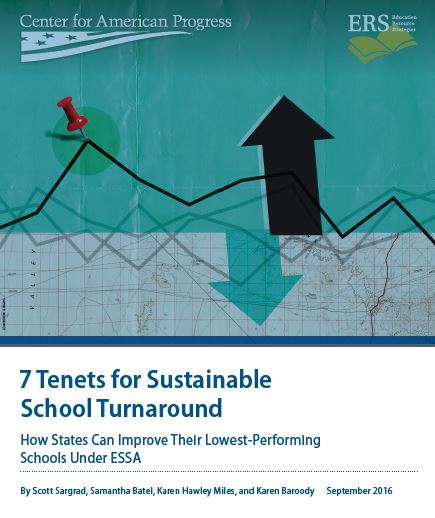 Enacted in December 2015, the Every Student Succeeds Act, or ESSA – which replaced the law known as No Child Left Behind – gives states greater autonomy to support their lowest-performing schools. States now have the opportunity to direct more Title I dollars to school turnaround initiatives under the new law than in previous years. The Center for American Progress (CAP) and Education Resource Strategies (ERS) released a new report today aimed at state education leaders: 7 Tenets for Sustainable School Turnaround.

“While school turnaround happens most directly at the local level, state-level policies and system-level reforms are key for supporting successful and sustainable school turnaround,” said Scott Sargrad, Managing Director of Education Policy at CAP and a coauthor of the report. “The principles outlined in this report reflect best practices from education leaders that have successfully implemented school turnaround in their districts and states.”

“All low-performing schools exist within a district context that can either support or hinder turnaround efforts,” said Karen Hawley Miles, President and Executive Director of ERS and fellow coauthor. “Now that states have significantly more discretion over accountability and direct intervention in low performing schools, we want to be sure that any turnaround strategy helps districts take the steps they need to ensure turnaround efforts will be successful and sustained.”

In January 2016, CAP and ERS convened state and local leaders with expertise in school turnaround to develop this set of design tenets for state policymakers, and the report released today uses evidence from the field to impact local, state, and federal law and policy. Education leaders from Massachusetts, Tennessee, Colorado, and Louisiana participated in the discussion and contributed research and best practices that led to the development of the state-level turnaround principles. The principles outlined by CAP and ERS are:

The report also recommends the appropriate roles for the federal government, states, districts and schools to play in supporting successful turnaround efforts.