How states pay their teachers, why it matters for students, and what state boards of education can do about it. 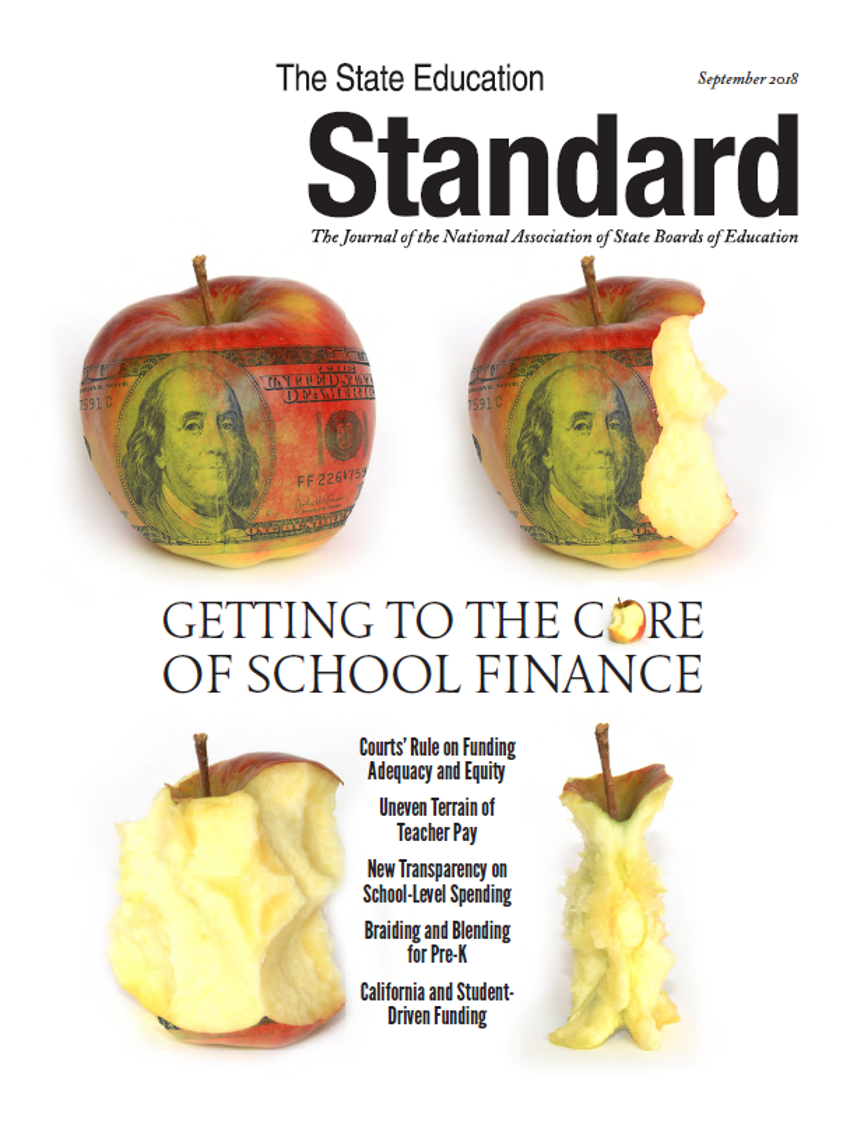 This article was originally published in the September 2018 issue of The State Education Standard, the journal of the National Association of State Boards of Education (NASBE)

Quality teachers are one of the most important factors in student achievement.[1] Yet since the recession, the real value of teacher salaries (adjusted for inflation) has decreased in the majority of states.[2] In about half of all U.S. states, the average teacher does not even earn a living wage needed to support a family. Inadequate compensation has predictable consequences for attracting and retaining the skilled professionals so crucial to student outcomes—especially in schools and subjects that are hard to staff. The strikes and protests that erupted last spring in West Virginia, Kentucky, Oklahoma, Arizona, and Colorado are visible manifestations of this troubling reality.

At the heart of the teacher salary issue are growing funding inequities among the states. Some states may need to invest more in education to raise baseline levels. But it will not be enough just to throw more money at the problem—states also need to take a thoughtful look at how well and how equitably all resources are allocated. When teachers are compensated fairly and strategically and when they are supported in their growth as professionals, students have a better chance to succeed.

Funding Trends over the Last 50 Years

From 1969–70 until 2014–15 (the most recent year of data available), the national average of inflation-adjusted per-pupil spending increased by more than 140 percent. But the recession of 2008 marked a watershed event where funding patterns across the states diverged: In more than 30 states, inflation-adjusted per-pupil K-12 funding actually decreased. In more than 20 states, this funding dropped 5 percent or more, and it fell 10 percent or more in five states.[3]

Throughout the years of spending growth and even after the recession, relatively few dollars went toward real salary increases for teachers.[4] Although student enrollment increased by about five million students between 1969-70 and 2014-15, staffing levels outpaced that trend, reducing both pupil-to-staff and pupil-to-teacher ratios. The number of staff per student increased by over 70 percent and the number of teachers per student went up by nearly 40 percent.[5] Meanwhile, average inflation-adjusted teacher salaries grew only 7 percent since 1970 and have remained mostly flat since the 1990s—with a crucial dip after the recession.

The decline in inflation-adjusted per-pupil funding since 2008 has hit some states harder than others. The states in the bottom quartile of K-12 funding in 2009–10 saw the greatest losses in total spending (adjusted for inflation). In contrast, average per-pupil revenue in the highest funded states actually increased over that period, widening the funding gap between “have” and “have-not” states. 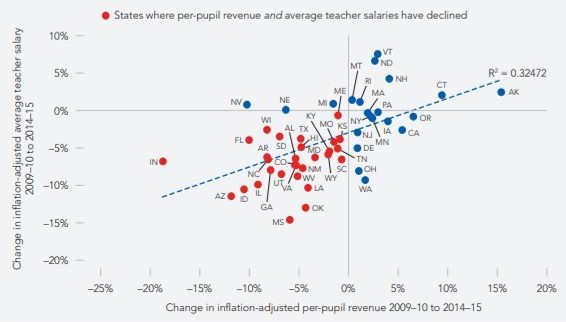 Are today’s teacher salaries enough to attract and retain a high-quality workforce? Some data suggest not.  Several recent studies, accounting for factors such as hours worked, gender, and race, conclude that teacher salaries today are between 14 percent and 25 percent lower than those for other professions available to college graduates.[6] One study by the Economic Policy Institute found that this gap has grown over time: Teachers in 1998 earned about 8 percent less than professionals with similar education and experience. By 2015, teachers underearned their peers by 17 percent.[7]

At the same time, districts across the country are facing significant teacher shortages. Virtually all states report shortages in numerous subject areas—including in elementary education, where there historically have been more than enough qualified applicants.[8] The pipeline of teacher applicants is also drying up, judging by the sharp decline in the number of U.S. college students enrolling in teacher certification programs—from 684,000 in 2011 to 419,000 in 2015.[9] The number of long-term crisis substitutes, emergency or provisionally certified teacher hires, and unfilled vacant positions in schools has dramatically risen over the past several years, particularly in low-income and rural communities.[10]

The depth of the salary gap appears most dramatically when the average teacher salary in each state is compared with a living wage metric that was created at Penn State and is maintained by Amy Glasmeier at the Massachusetts Institute of Technology (MIT). The MIT researchers calculate the living wage as the minimum income needed to cover basic expenses (including food, child care, medical costs, housing, transportation, and a miscellaneous “other”) based on local costs and across a variety of family structures.[11] To get a sense of the value of a teacher’s salary, we looked at MIT’s living wage for one- and two- parent households with a single salary earner and one to three children and created a weighted average to account for the prevalence of different family types. We call this metric a “family living wage.”[12]

Figure 2: Gap between the average teacher salary and the family living wage in each state in the school year 2016-17 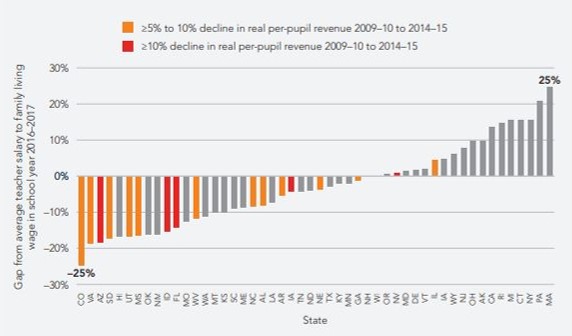 Not surprisingly, states with the greatest gap between salaries and a family living wage showed the most significant signs of an unhealthy labor market for teachers. Those with salary levels more than 15 percent below the family living wage exhibited the following characteristics, compared with states that pay teachers more than 10 percent above the living wage:[14]

The majority of states where teacher salaries earn less than the living wage are also most likely to have lower K-12 spending as a percentage of state GDP.

Yet all states show signs of labor market problems, since even states where teacher salaries are above the family living wage pay on average only 9 percent above.

In their role as advocates for educational quality and equity, state boards of education can help guide state agency policymakers and legislators toward funding strategies that address the problem of stagnating teacher salaries. They can call attention to the need for improving the entire value proposition for teachers—salary, benefits, and working conditions—rather than merely putting more money into existing structures. State boards’ efforts to set high standards for teachers will be for naught if highly skilled individuals do not want to enter the teaching profession in the first place.

As a first step, state boards can start the policy conversation by seeking answers to the following key questions:

Innovative approaches for increasing teacher salaries to maximize impact on student performance can include the following:

To provide an excellent education to all students, states must not only ensure funding adequacy, they must also pay attention to resource equity—how people, time, and money are allocated to create learning experiences that enable all students to succeed.

In states struggling to attract and retain high-quality teachers, state boards of education can advocate for improving the “value proposition” of becoming and staying a teacher, particularly for the least experienced teachers, who have the highest turnover. Within states, some districts may have a harder time than others in attracting and keeping great teachers, especially those serving high concentrations of student need, which often have lower funding levels. Creating this strong value proposition will require redesigning schools—organizing people, time, and money differently.

The current unhealthy state of the labor market for teachers is a challenge that must be met. But it is also an opportunity to modernize the teaching profession and to adopt practices that foster innovation and lead to more effective use of all K-12 resources. Supporting teachers as the professionals they are is a critical step that will lead the way to achieving student performance goals.

Karen Hawley Miles is the CEO and president of Education Resource Strategies, a nonprofit that partners with district, school, and state leaders to transform how they organize people, time, and money so that every school prepares every child for tomorrow, no matter their race or income. Nicole Katz is a principal associate at ERS. This article is adapted from Low Teacher Salaries 101: How We Got Here, Why It Matters, and How States and School Systems Can PayTeachers More Fairly and Strategically” (Watertown, MA: Education Resource Strategies, June 2018), which can be accessed here.

Click below to see our new Reimagining the Teaching Job Resource Collection:

[6] Sylvia A. Allegretto and Lawrence Mishel, “The Teacher Pay Gap Is Wider Than Ever,” report (Washington, DC: Economic Policy Institute, August 9, 2016). A note from the report on their methodology reads, “Regression-adjusted estimates include controls for age (quartic), education, race/ethnicity, geographical region, marital status, and gender for the pooled sample. Data are for workers age 18–64 with positive wages (excluding self-employed workers). Non-imputed data are not available for 1994 and 1995; data points for these years have been extrapolated and are represented by dotted lines.”