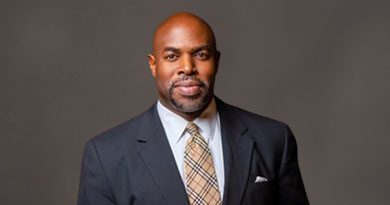 Desmond Blackburn, Ph.D, is Chief Executive Officer (CEO) of New Teacher Center (NTC). NTC is a national non-profit organization that works to disrupt the predictability of educational inequities for systemically underserved students by accelerating educator effectiveness. Founded in 1998, NTC works in conjunction with school districts, state policymakers, and educators across the country to increase the effectiveness of teachers and school leaders at all levels, with a focus on those working in underserved communities.

Desmond began his career in education in 1996 as a High School Math Teacher for Broward County Public Schools (BCPS) where until 2015 he additionally served as an Assistant Principal, Principal, Director of School Improvement, Area Superintendent, and the Chief of School Performance & Accountability. In 2015, he became the Superintendent of Schools for Brevard Public Schools (BPS). Under his leadership, BPS achieved 65% proficiency on 3rd grade literacy assessments, the 10th highest graduation rate in the state, three schools earned the distinguished Blue Ribbon award, and the State of Florida graded BPS an “A” for two consecutive years.

As a school district leader, Desmond served both state and national organizations including the Florida Association of District School Superintendents (FADSS) and Chiefs For Change. He is a Broad Academy Fellow and Governor Rick Scott recently appointed him to serve on the Marjory Stoneman Douglas Safety Commission. His fraternal affiliations include the Prince Hall Masonic Lodge and Alpha Phi Alpha Fraternity, Inc.

He was born in Mt. Vernon, New York to parents, Desmond and Diana. He and his wife, Kelli, have been married for 23 years. They have two sons, Dean and Grant.