How five districts are leveraging ESSER dollars to "Do Now, Build Toward"

As school systems plan their spending strategies for funding from the American Rescue Plan Elementary and Secondary Schools Emergency Relief Fund, few specifics or quantifiable numbers are publicly available in the plans they are submitting to their states.

But we got a backstage pass. Here, we offer a unique, behind-the-scenes look at how five sample districts tentatively plan to leverage ESSER dollars to take a “Do Now, Build Toward” approach that equitably meets students’ differing needs and lays a foundation for long-term financial sustainability.

The five districts profiled represent a range of geographic locations and local contexts, but all serve relatively higher proportions of students from low-income backgrounds. As they approached their own ESSER planning and budgeting, these districts shared information and insights about their processes so far, the specific strategies they’re choosing for investment, how they are thinking about equity, and their plans for long-term sustainability.

Additionally, the first-look analysis includes concrete guidance to help public school systems and communities gauge how well their own ESSER plans align with our seven principles for investing ESSER funds.

Use the drop-down menu below to explore current district plans and considerations.

FIRST LOOK: Going behind the scenes

District leaders are creating plans for the unprecedented level of funding that they received through the Elementary and Secondary School Emergency Relief (ESSER) federal stimulus package. The window for spending these funds goes through summer 2024. That may seem far off, but in just a few months districts will begin the budgeting process for the 2022-23 school year - the second of the three years left in the ESSER spending window. This means that the decisions districts make this fall are a crucial pathway to ensuring that every student has the high-quality learning experiences and support that they need to thrive.

However, other than a requirement to commit 20 percent of their American Rescue Plan / ESSER III dollars to addressing student learning loss, federal and state guidance on how districts should use these funds is quite broad. Furthermore, to meet most state requirements for approval, districts’ plans do not need to provide a detailed description at the level of budgetary line items, so the publicly available data often does not reflect the full breadth and depth of decisions that district teams are making.

All of this means that we need to look beyond the formal plans that districts are submitting to states to understand how leaders are prioritizing the use of federal funds to build toward a better, more equitable vision of how schools can work for all students. To better understand district leaders’ emerging strategies - and to help inform decision-making in other districts across the country - we worked closely with leaders from five districts to analyze their emerging multi-year strategy and spending plans.  By working closely with leaders from these five district teams, we are able to offer greater detail and deeper insight into their sample of plans than what is otherwise available in submissions to state education agencies. We also gained a deeper understanding of the process around how district leaders are navigating decision-making, which we believe can only be helpful for others making similar decisions.

We started with our 7 Principles for Investing ESSER Funds, a framework designed to help districts invest their ESSER funds with a “Do Now, Build Toward” mindset that addresses critical student needs now and lays a foundation for sustainable, lasting improvement. Then, we narrowed the focus of our review of districts’ plans to three of the seven principles: 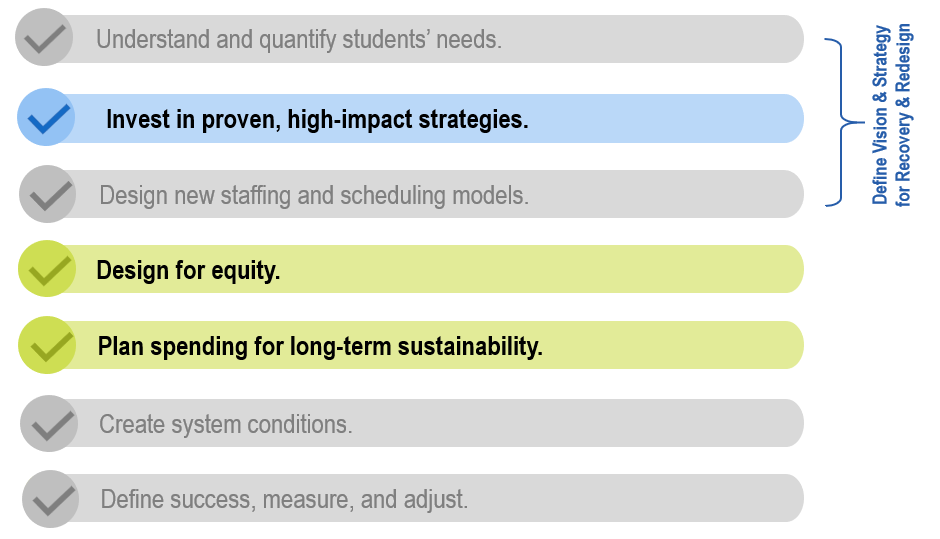 Note: These preliminary plans do not reflect final allocation decisions. Each district has mapped out potential investments over the next three years and will engage community representatives and measure impact as they solidify investments going forward.

What strategies are districts choosing to invest their ESSER funds in?

Not all five districts have planned all of their money.

Districts have submitted their ESSER II plans, but some are still in the process of planning their American Rescue Plan / ESSER III dollars. Districts C and D have not yet share preliminary plans for ESSER III fund, and District E plans to use their remaining dollars to support unfinished learning. See Figure 1 for details. 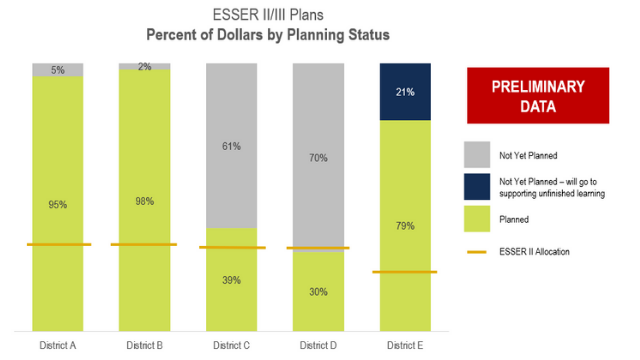 Most districts are planning to direct the majority of their ESSER funds toward the five Power Strategies, with a focus on Time & Attention.

Figure 2 shows how each of the five districts are tentatively planning to allocate ESSER dollars toward Power Strategies, as well as to foundational investments* outside of Power Strategies, such as health and safety, facilities upgrades, technology, new virtual school models, hiring central office positions, and maintaining current staffing levels despite declining enrollment. Figure 2 also shows how in three of the five districts, expanding time and attention makes up more than 30 percent of planned spending. 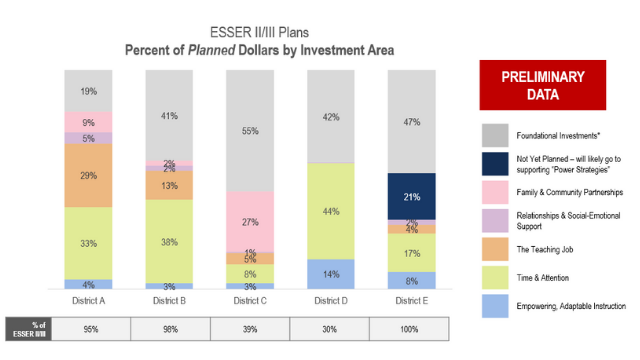 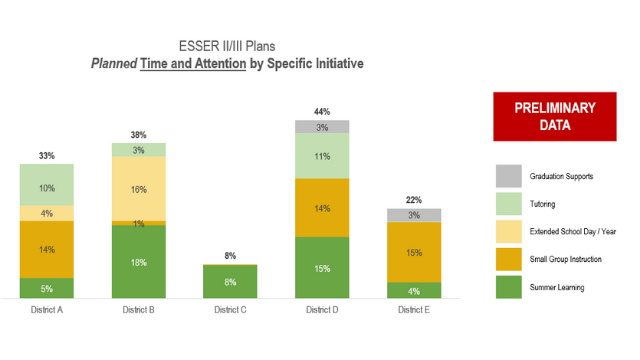 Despite expectations that districts would invest heavily in tutoring as a tool for addressing unfinished learning, so far, only three of the five districts are planning to invest in that strategy at all. One district chose not to invest in tutoring now because dollars meant for that strategy in the spring went largely unused. The district is not ruling out tutoring entirely, but is considering an approach that hires external academic teachers , who then may be able to grow and attain credentials over the three years, creating a stronger teacher pipeline in the district.

Districts are leaving placeholders in their ESSER plans for future years, allowing time to measure what works before committing all of their ESSER funds.

Figure 4 shows that an increasingly larger portion of District E’s ESSER II/III allocation is not yet planned. The district intends to direct those dollars toward addressing unfinished learning, but they will solidify those investments over the course of the next two years, as they learn more about students’ needs and measure the impact of their current investments.

How are districts thinking about equity?

District E is planning for equity by using a need-based tiering system.

District E is working to disrupt patterns of inequity by targeting some ESSER resources to schools based on need. To determine where the most pressing needs exist, the district created a need index based on pre-COVID factors, including:

The district then weighted these index factors to build a three-tiered system for distributing resources:

Figure 5 shows how District E plans to direct 17 percent of ESSER money for Power Strategies based on its school-based, three-tiered system -prioritizing Tier 1 and Tier 2.

In Figure 6 you can see how District E plans to provide additional resources to students with the greatest needs, and how that compares to spending pre-ESSER.

District E is prioritizing its equity-focused spending on improving the teaching job, and increasing time and attention for students.

Figure 7 shows how dollars might be used to build teacher capacity and accelerate learning recovery in schools in the highest tiers of need. District E is weighing hiring approximately 350 full-time positions. These roles would support teachers by enhancing collaboration practices and building their capacity, as well as create smaller group sizes to support students who are behind grade-level. District E plans to sunset these positions at the end of ESSER and move these teacher leaders back into full-time teaching roles.

Plans are active, iterative, and can change - and decisions about funds not yet planned could have a large effect on overall per-pupil funding.

In its original plan, District E budgeted for all ESSER dollars, but as they got further into the process, they pulled back to ensure they had sufficient runway and were being realistic about who they could hire. The district directed funds for roughly 350 positions but is cautious about putting additional funds toward school-based personnel given: 1) labor market constraints, and 2) sustainability concerns. District leaders are currently engaging the community and families to plan for the upcoming school years and to determine spending strategies, including how to allocate the remaining 21 percent of ESSER dollars.

Ultimately, decisions about the funds not yet planned could have a significant impact on overall per-pupil funding in District E. Figure 8 shows how per-pupil funding would play out across schools if funds are allocated differently bases on the district’s equity index moving forward. If District E allocates their remaining 20 percent of funds using their need-based tiering system, students in the highest-need schools would receive 1.4x more than students in lowest-need schools on a per pupil basis. 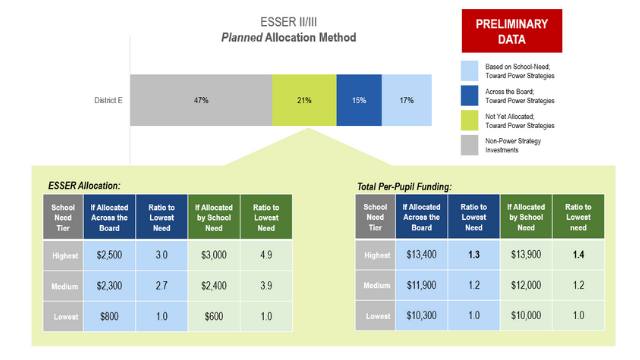 How are districts planning to make their investments sustainable?

ESSER gives districts a three-year runway to implement a “Do Now, Build Toward” approach.

Districts will want to sustain many of the changes they’re funding with ESSER dollars long-term because they enable strategies - such as tutoring or increasing time for teacher teams - that were needed to accelerate learning and advance equitable outcomes even before the pandemic. Therefore, districts will need to use their temporary dollars to target both near-term COVID-recovery needs and lay the groundwork for longer-term redesign. By focusing on both, district leaders will have already done the work of shifting resources and changing underlying cost structures to enable these new ways of working to continue even when the ESSER funding window ends.

As Figure 9 shows, when it comes to long-term sustainability, there are three conceptual scenarios - ERS recommends the third approach.

Scenario one is the “ramp up and ramp down” approach. There is no redesign involved because there is no money to sustain new investments after the three-year ESSER funding period. The investments will simply stop, and the district will return to previous strategies.

Scenario two is a “roll-the-dice” strategy in which districts invest money into redesign without adjusting the existing cost structures - they ride out the three-year ESSER funding period, but are then forced to find more money. This creates a fiscal cliff.

The third scenario is a “Do Now, Build Toward” approach that follows ERS’ Seven Principles for Investing ESSER Funds. With a vision to “Build Toward” and sustainable underlying cost structures in place, spending can revert to pre-COVID levels. The hardest part of this approach is figuring out which current strategies (light green) can be rolled back so that redesign strategies (light blue) can be rolled into future budgets in sustainable ways.