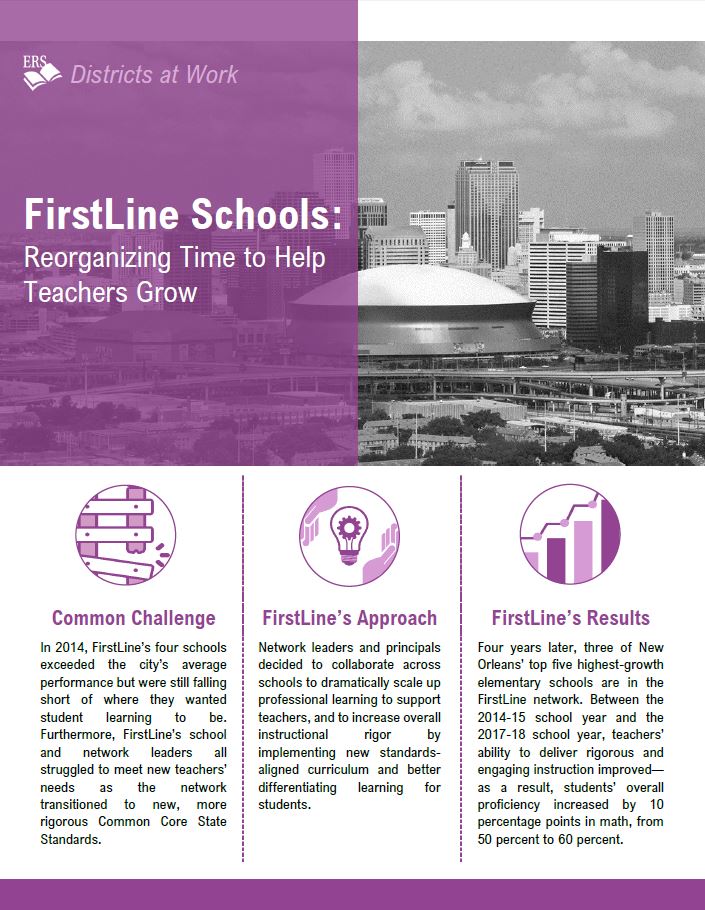 FirstLine Schools in New Orleans, Louisiana, serves predominantly low-income students of color. In 2014, FirstLine's four schools exceeded the city's average performance but were still falling short of where they wanted student learning to be. Furthermore, FirstLine's school and network leaders all struggled to meet increased teachers' needs—many of whom were in their first two years in the profession—as the network transitioned to new, more rigorous Common Core State Standards.

A 2014 leadership retreat centered around the question "What would it take to have more consistently rigorous and engaging classrooms across our network?" FirstLine's school leaders—who historically operated with full autonomy over scheduling, curriculum, and professional learning—realized that it didn't make sense for each of them to try to solve this question on their own. They decided to collaborate across schools to dramatically scale up professional learning to support teachers, and to increase overall instructional rigor by implementing new standards-aligned curriculum and better differentiating learning for students.

Four years later, three of New Orleans' top five highest-growth elementary schools are in the FirstLine network. Between the 2014-15 school year and the 2017-18 school year, teachers' ability to deliver rigorous and engaging instruction improved based on the network's observation rubric—as a result, students' overall proficiency increased by 10 percentage points in math, from 50 percent to 60 percent.

Click the links below to explore other case studies in the Districts at Work series that accompany FirstLine Schools: Reorganizing Time to Help Teachers Grow by either audience role or by topic.

Explore the District at Work Series

School districts across the country struggle with systemic challenges, such as increasingly rigorous academic standards, more varied student needs, and persistent achievement gaps. The Districts at Work series of case studies shares specific examples from districts that are taking a new approach to these types of systemic challenges—and seeing exciting results.