From Financial Transparency to Equity: Part 1 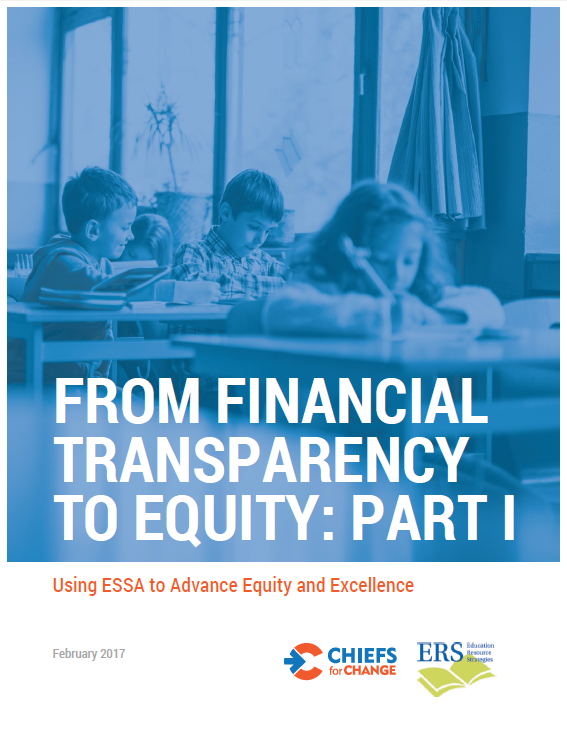 The Every Student Succeeds Act (ESSA) mandates that school districts publicly report their per-pupil expenditures at both the district and individual school levels. States have an opportunity to demonstrate leadership and a commitment to equity and excellence by not just complying with the school spending equity requirement, but by designing and implementing a methodology that will allow districts to use data to make strategic and smart decisions for the equitable distribution of resources.

This brief summarizes the insights from a working group of education chiefs convened by Chiefs for Change (CFC) and Education Resource Strategies (ERS). The group sought to answer: How might we allocate resources to achieve the best outcomes for kids? How can better understanding our school spending equity patterns help us do this?

See our action steps for building school spending equity when it comes to your ESSA financial reporting.

Excerpt from the paper

Challenge 1: How do we report school spending equity at the school level accurately?

Many large school districts typically distribute only about half of their funds at the school level. Therefore, when these districts report on school spending equity, their per-pupil figures fail to include a range of resources that are used in schools, but billed centrally. Special education teachers accounted for in the district’s special education department budget, itinerant paraprofessional support staff, and school security guards funded through a centrally-managed contract are three such examples.

The state’s methodology should produce a true picture of school spending equity – whether those resources are currently accounted for at the school or district level. The challenge of fully reporting school-based spending encompasses two issues:

Challenge 2: How do we interpret school spending equity and make sense of differences across schools?

Even with consistent and accurate per-pupil numbers reported for every school, what are stakeholders to make of the data? Likely, they will see a large spread of school spending equity levels – and they may search out individual schools that appear to be high- or low-funded. Indeed, CFC cohort members found that when they analyzed their schools’ per-pupil data, schools with the highest funding spent about three times as much as the lowest-funded schools.

However, variation in per-pupil school spending equity alone says relatively little about the equity of resource distribution. CFC districts observed that schools receiving more money per-pupil are not necessarily over-resourced, and schools receiving less money per-pupil are not necessarily under-resourced. Many factors drive variation in funding – some strategic and deliberate, some incidental. States and districts must understand what causes variations in school spending equity, and how to communicate these variations to the public.

Challenge 3: How do we place school spending equity into the context of a broader equity and excellence strategy?

Equity and excellence aren’t just about how much – but how well. What schools do with the resources they have – and the type of resources they have – matters even more than a school’s level of funding. In fact, the districts in our workgroup found that above a certain baseline, there was little correlation between per-pupil spending and the success of the school’s students.

Fair funding is important, but if equitable resource distribution does not foster success for all students, it becomes an academic exercise. Conversely, if a system consistently prepares students of all need levels and backgrounds for college and careers, its school spending equity and resource distribution choices need not necessarily be challenged.

There are many factors that influence the quality of educational outcomes and the distribution of key resources that will not necessarily show up in a per-pupil school spending equity report. In order to speak authoritatively and comprehensively about equity, a district must move beyond just reporting on school spending equity and consider other metrics strongly related to educational equity and excellence – some of which may have no correlation at all to funding. These can include student access to the most effective teachers, access to rigorous courses and enriching experiences, access to extra time and support for struggling learners, and indicators around climate and culture that speak to a school’s environment.

Learn More: What is Resource EquitY?